In November of 1996, California voters approved Proposition 209, a California State constitutional amendment, providing that government entities “shall not discriminate against, or grant preferential treatment to, any individual or group on the basis of race, sex, color, ethnicity, or national origin in the operation of public employment, public education, or public contracting.” (Cal. Const. Article 1, Section 31.)

It was March 2014, when the first attempt to repeal prop 209 was made by California State Senate proposition 5, and our esteemed Congressman, Ro Khanna, strongly opposed it! 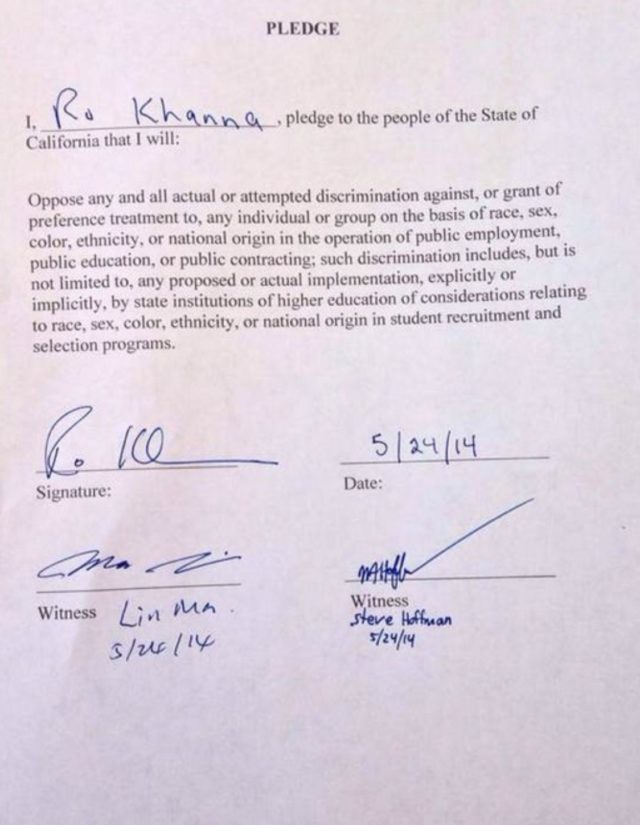 Guess what? A few days ago, Congressman Ro Khanna changed his mind and now thinks that race, color, sex, national origin-based discrimination or preference to UC admissions, public jobs, and public contract awards is the right thing to do.

Published on “Opportunity for all coalition” blog site, representative Khanna said, “As a proud member of the AAPI (Asian American and Pacific Islander) community, I wholeheartedly endorse ACA 5 (Prop 16) — because every single Californian stands to benefit from affirmative action and equal opportunity programs, programs that have never been more critical than they are today.”

He continued, “Make no mistake: Proposition 209 was authored by Wall-Street-backed interests who felt threatened by an increasingly diverse California, so they put a thumb on the scale for their own businesses. This hurt countless California communities — very much including my AAPI community. Our enrollment in the UC system has suffered; our ability to build strong businesses has been hamstrung; and our ability to secure good-paying jobs has been undercut. Anyone who says anything different is misrepresenting the facts — because AAPI Californians will benefit from ACA 5(Prop 16), period.”

“Lastly,” Rep. Khanna stated, “a generation has passed since Proposition 209 became law in 1996. ACA 5(Prop 16) will give millions of Californians their first opportunity to raise their voice and demand equal opportunity. I’m proud to support this bill, and I will do everything I can to ensure it passes the Legislature and becomes law with a win on Election Day.”

Congressman Ro Khanna has really lost touch with the community of the 17th district. He falsely claims that it benefits Asian, Indian, and Pacific Islander communities. Truth is that it benefits only untrustworthy politicians like him, and others who have opposed it. It was legally challenged three times and lost. The lies perpetrated by Ro Khanna, in his statements above, are unbelievably devious. He is misleading the Asian community with false information that they are being hurt by prop 209. He is hoping that they will not do any diligence, and vote for ACA 5(Prop 16). His real purpose for flipping on what he promised in 2014 maybe something else.

Truth is that, under existing law, the University of California takes account of each individual applicant’s personal story and achievements. Is this student the first in her or his family to go to college? What is the family income level? How many students from an applicant’s high school have gone to college?
All these factors above are considered, just not a race, color, sex, and national origin!

In other words, the rising percentage of Latino Americans graduating from California’s high schools has been matched by the rising percentage in their admission to UC, and the drop in Caucasian Americans’ percentage of California’s high schools has registered in their drop in UC enrollments. The other races stayed about the same. These numbers do not call out for racist Affirmative action Programs endorsed by Ro Khanna.

In public jobs, blacks are already at about 20% . It is 30% higher than their population proportion. ACA 5(Prop 16) actually might actually hurt them.
The truth is that Affirmative action Programs, started by John F. Kennedy in 1961, were designed to ensure that no prime federal contractors discriminated against sub-prime contractors based on race, color, sex, and national origin. There was never any intention for quotas, set-asides, etc.

Outreach programs to include small businesses, disadvantaged businesses, first-time businesses, minority-owned businesses, is totally fine under Prop 209, as long as all are approached equally, not just targeted to one category. That is why Prop 209 is fair and must stay, and ACA 5(Prop 16) must be defeated.

Congressman Ro Khanna is the one misrepresenting the facts and lying to you when he says that the AAPI community has been suffering in getting fair enrollment in the UC system, in getting good-paying jobs, hamstrung informing businesses, and that Wall Street is involved in prop 209. He has some hidden ulterior motives, which are not clear.

Truth is exactly the opposite. Children of hardworking AAPI and other communities will suffer, as they will be stripped of fair competition to enter the UC System for higher education. They will either have to go out of state or private universities that will cost 2-3 times more. The quality and standard of the UC system will decline.

We can not trust Ro Khanna, or the state elected people who are supporting ACA 5(Prop 16). They completely misrepresent the facts and lie to get your votes. Let’s vote them out this November! We need honest and responsible representatives. We deserve better!

One-click email to all finance committee members + some senators:
http://email-appropriations.noaca5.org

Please oppose and STOP ACA 5(Prop 16). Let us together help children of all races, color, and ethnicity learn better, and prepare them to compete vigorously at national and international levels. That would be a real gift to our society, not a debilitating quota system!

Please support me, support my campaign, and help me to fight for you. https://secure.anedot.com/tandon-for-congress/donate

I’ve lived the American Dream and will do all I can to assure everyone has that opportunity.  Outstanding and fair education practices are a huge part of that.
I hope you will help me.  There are several ways you can support my campaign today!
PLEASE CONTRIBUTE TODAY!  I NEED YOUR HELP!
DISPLAY A YARD SIGN OR WINDOW SIGN!
JOIN MY VOLUNTEER ARMY!
LIKE MY FACEBOOK PAGE!
FOLLOW MY TWITTER FEED!

I’d be honored by your support.